Have you ever noticed that Victorian homes can look wildly different from each other? That’s because “Victorian” actually refers to a time period and not one specific style of home. There were many architectural styles that became popular in the United States when Queen Victoria ruled Great Britain (1837-1901).

Each of these styles draws inspiration from European architecture and is showcased in homes built in America during this time period. During this period, new machines were invented to mass-produce building materials and furniture. The ornate details on homes of the wealthy were now accessible to more people and they filled their homes with these intricate details.

The Historic Old West End in Toledo is one of my favorite neighborhoods to walk through and admire old, historic homes. You can find every type of Victorian-style home within a few blocks from each other and each one has a unique story. Today, I am sharing five popular Victorian homes designs and their key identifiable features. These include Gothic Revival, Queen Ann, Folk Victorian, Italianate, and Second Empire styles.

I totally geek out when it comes to learning about history and even started listening to a podcast about Queen Victoria. This useful guide is sure to earn you some points at your next trivia night!

Gothic Revival homes often have castle-like features. The style draws inspiration from architecture during Medieval times. This style was most popular between 1840-1880 is popular with many churches and cathedrals.

The Barber house located in the historic Old West End Toledo neighborhood is a mix of gothic and colonial revival styles.

The Italianate style is one of the most popular Victorian styles of the era. This style drew its inspiration from villas in Italy and became popular in the US after the Civil War. You can find this style on commercial buildings on many Main Streets of historic downtown areas in the Midwest.

My friends purchased this historic Italianate home that was close to being demolished and completely restored it! This home has many of the key features, like the deep overhangs and ornamental brackets, for instance. They were nice enough to let me write up two blog posts filled with details on the exterior restoration and interior renovation of their historic home.

Toledo, Ohio is home to many historic homes that are affordable to purchase. The Italianate home below was listed for $6,000 and included many original features inside the property. It required many repairs and updates, but it included one of a kind features that can’t be found in homes built today.

Most older downtown areas have a similar look and feel and that is because they are often the Italianate style.

The Queen Ann style was popularized by the architect Norman Shaw in the 1880s. This style is what most people think of when they imagine a Victorian home. The Queen Ann style also inspired the Arts & Crafts style movement that came later in the early 1900s.

This historic home in Toledo’s Old West End is a mix of Queen Ann style and Colonial Revival.

Below is another beautiful Queen Ann-style home (get the full tour here) in Toledo’s historic Old West End. My cousins own this home and there are just as many incredible details inside the home as there are on the outside.

The painted Ladies in San Francisco are probably the most recognizable Queen Ann-style homes in America.

Second Empire style homes are always the easiest for me to identify because of the mansard roof.

Folk Victorian-style homes are like if Queen Ann and a farmhouse had a baby. From 1870-1900 you saw the folk-style homes popping up all over the United States. This style includes ornate detailing on the exterior similar to Queen Ann. The difference between Queen Ann and folk style came from the interior design. The interior of Folk Victorian homes was built for function and as a result, more modest in detail.

Pin the Image Below!

5 Tips to Get Your New Home Organized Fast

Welcome to Our Temporary Home in Ohio 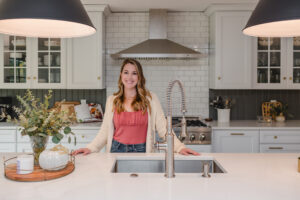 Hi, Im Lindsey! I love sharing tips to help busy moms DIY their way to a functional home that brings them joy every day. Following along as I renovate our 1960’s home in Ohio.

Happy Friday! I love this sweet pic of my kiddos a

This kitchen has seen a lot of action the last few

Last night I hosted a book club and we read Three

I always end up with leftover product when I DIY o

Every new year I always get the itch to organize a

The basement makeover was by far my favorite home

Union Station is one of my favorite spots in Denve

Wouldn’t have wanted to spend my NYE 2022 any ot

There is definitely a theme with the 2022 color of